Scrap Trident
Say NO to NATO
Stop the War sees scrapping Trident and being out of NATO as interlinked.
NATO is a nuclear club with a fi rst nuclear strike policy.
For twelve years NATO has been conducting the war in Afghanistan where
tens of thousands of civilians have died and three million people have become
refugees. Most recently it was the military coalition, which the US tried
to mobilise to legitimate the bombing of Syria.
A decade of popular protest and campaigning led to the historic vote at Westminster
not to bomb Syria. Stop the War is convinced that popular mobilization is the
key to removing Trident for good. Campaign for No to Trident AND No to Nato.

In 2014 the UK government will invest tens of millions in a ‘celebration’ of the
First World War. Stop the War has launched the No Glory In War Campaign
and in Scotland we are working with a wide range of other organisations to
ensure that there is a grass roots response that links the carnage of 1914-18
with the policy that gives rise to war today. We are planning cultural events,
poetry, music and exhibitions; murals and banners; a Scottish No Glory website;
meetings and political debate.

If you can get involved in any way – with
ideas, activism and skills please contact us at glasgowstopwar@gmail.com

Check out the No Glory in War website www.noglory.org

Posted by Glasgow Stop the War Coalition at 07:07 No comments: 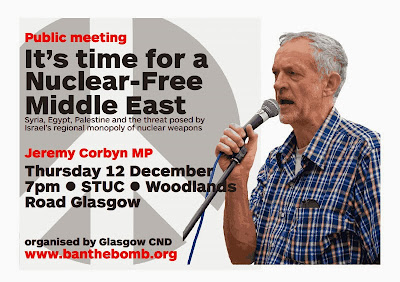 On 12th December Glasgow CND is holding a public meeting entitled ‘It’s time for a Nuclear-Free Middle East’.
The speaker will be CND vice-chair Jeremy Corbyn MP. Jeremy will explore the armed conflict in Syria and the social upheavals in Egypt in the context of the campaign for freedom, justice and statehood for the people of Palestine. In particular, he will highlight the ongoing threat posed by weapons of mass destruction in the region.
At a time when Syria’s chemical weapons are being destroyed by UN inspectors and Iran has agreed to negotiations over its nuclear power programme, surely it is time for Israel - the only nuclear weapons state in the region - to come clean about its nuclear arsenal and place them under international supervision and control.

Posted by Glasgow Stop the War Coalition at 04:13 No comments:

Posted by Glasgow Stop the War Coalition at 11:38 No comments:

NO TO THE BOMBING OF SYRIA - NO TO WESTERN INTERVENTION

The Stop the War Coalition strongly opposes any military attack on Syria. While we oppose all use of chemical weapons, the latest alleged such attack in Damascus should not be used as a pretext for further exacerbating an already bloody civil war.
It seems that the Western governments have already made up their minds about this attack before it has even been reported on by UN weapons inspectors. They are demanding that ‘something must be done’ even though their record of ‘doing something’ has been nothing short of catastrophic.
There have been numerous western interventions in the Middle East and South Asia over the past 12 years. While the attacks on Afghanistan, Iraq and Libya were all argued for on humanitarian grounds, they have all increased the levels of killing and misery for the ordinary people of those countries. They were in reality all about regime change. This is also what Syria is about.
The same people who brought us those wars have learnt nothing from their mistakes. Now the US, Britain, France and their allies in Turkey and Saudi Arabia are pushing for air strikes. The misnamed envoy for peace in the Middle East, Tony Blair, is once again urging an attack.
Such an attack will have no basis in international law, nor will it have any moral force, despite claims by US Secretary of State John Kerry, from governments who in the past supplied Saddam Hussein with chemical weapons and who have used depleted uranium and white phosphorus in Iraq.
The truth is that this latest plan is about intervening to reshape the Middle East in the strategic interests of the West. Military intervention will make a solution to this complex civil war even more difficult and will be a direct violation of the agreements made at the recent G8 meeting to attempt to resolve this war by an International Conference.
We will be protesting and campaigning against any attack and demand that the British government listen to public opinion, as expressed in recent polls, and play no part in any such attack.
27 August 2013.
Posted by Glasgow Stop the War Coalition at 06:34 No comments: 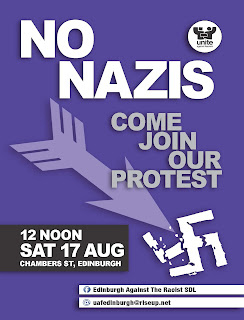 If you would like to travel threw for the demonstration email: uafglasgow@gmail.com for transport options.

If you would like to add your name to our statement below please “Like” it on our facebook page "Edinburgh Against Racist SDL" and share or email us: uafedinburgh@riseup.net
MULTI-CULTURAL FESTIVAL - MULTI-CULTURAL CITY
The racist and fascists of the Scottish Defence League (SDL) are to march through the centre of Edinburgh during the Edinburgh Festival on Saturday 17 August.
After the tragic murder of soldier Lee Rigby organisations such as the SDL have been trying to use this to whip up racism and direct hatred against all Muslims.
We must not give an inch to those who try to judge an entire religion, race or nationality on the actions of a few. We do not hold all Norwegian Christians responsible for the actions of Anders Breivik whose rampage in 2011 left 77 people dead.
Unite Against Fascism (UAF) condemns the SDL’s attempts to use demonstrations to stir up racial hatred. Wherever the SDL go attacks on Muslims and other communities follow.
The Edinburgh Festival is a celebration of our rich cultural diversity. Tourists and local people do not want
racist and fascist thugs on our streets.
Unfortunately they have been given permission by the police and council to march. Malcolm Chisholm
MSP said – “I am very sorry that permission has been granted for the SDL march and believe it is now more important than ever that there is a massive counter demonstration against these purveyors of hate who are not welcome in multicultural Edinburgh.
We pledge to stand together with our brothers and sisters of all communities to defend our multi-
cultural city. We support the march and protest organised by Unite Against Fascism on Saturday 17 August at midday, assemble Chambers Street. 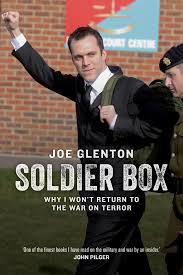 
The annual general conference will be a chance for the whole of the Stop the War membership to discuss the complexity of the new forms of war we have witnessed, to plan further action and to debate how best to strengthen the anti war arguments and organisation.

The conference will take place on Saturday September 14th from 10 - 5pm at The Old Cinema University of Westminster 309 Regent St W1B 2UW.

Stop the War groups can send up to four delegates and other affiliated groups can send two delegates.
Conference is also open to individual members. Members must be paying a monthly or annual subscription - if in doubt please get in touch to check your membership status. Members who joined before 15th of July 2013 have full voting and speaking rights. Members who joined after this date can take part as observers.

All delegates must register by Friday 7th of September. Registration costs: £10 standard / £5 concessions.

The conference will discuss the general state of the war on terror, movement priorities and how best to organise locally. STW groups and affiliated organisations can submit one resolution per organisation. The deadline for submission is Friday 30th of August.
If you would like to attend email glasgowstopwar@gmail.com
Posted by Glasgow Stop the War Coalition at 08:41 No comments: